Well… the wait is over, this is it. It has just turned 00:00 on April 12th 2014, and by the time the countdown reaches zero I will have landed in Greenland.

It feels a little surreal to have finally reached this point, and I still don't think it will fully hit me until I am on the ice sheet taking that first step forwards. I'm getting shivers just thinking about it.

I will be off the radar from now for all intents and purposes, and this is quite likely my last blog until I get back. But, and it's a small 'but', there is a chance I will be able to send a short sentence or two through our satellite phone to my cousin who will post it on my behalf to let everyone know I'm still alive, but I can't make any guarantees, on the posting that is 😉 So a bit of content quickly before I head off…

On Thursday 10th April we had a team meeting at the offices/warehouse of Mountain Guides to meet our expedition leader Robert Thor (I know, awesome name huh) and two of my other team mates: Tom from Texas who has already completed trips to the north and south poles with only Greenland left to complete the set, and Bjarni from Iceland which speaks for itself (all Icelanders have a 'hard core' gene). Our last team member Eric is already in Greenland so we will meet him there.

During the meeting we stripped down our bags and ran through every single piece of kit with Robert who made sure everything was in order and nothing was missing. After this we all headed upstairs to one of the meetings to review our intended route, including the breakdown of anticipated progress each day and run through some of the logistics involved.

I have to admit, when we were running through all the details, being informed of the risks we will face and stories of past trips, it really starts to hit home how full on this journey is going to be…

So, let me share with you some of what we discussed… 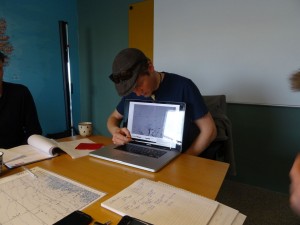 On the morning of Saturday 12th April we leave Reykjavik and fly to Kulusuk/Greenland, then transfer by helicopter to Tasiilaq [no that’s not a typo]. Here we will liaise with the Greenland authorities who will perform their security checks and review all personal kit, camp equipment, supplies, and also review our permits and paper work. We will also pick up our shot gun and ammunition for protection from predators (let's hope we don't see any, but if we do see them they stay all cute and cuddly in the distance).

Once this is finalised we can start packing the sleds ready for our departure.

At present we are scheduled to be heli lifted out to the ice sheet on the morning of 14th April, and weather permitted we will touch down at a height of around 900m. If everything is finalised sooner, the chopper ready to go and weather good we will leave earlier. If the clouds close in the pilot will have to drop us below the cloud line for safety reasons. All of us want to avoid this though, since it will mean we have a lot of additional hard work ahead of us to ascend to our original designated starting point, and with fully loaded sleds too.

Looking at the trip overall, we will average around 20kms a day, but differences arise when we break the trip down more. As you may have guessed, we will start off with a slow pace and build up our momentum as we go. For example, we are aiming to cover around 10-12kms only on the first day so as to not over stress our bodies straight off the mark, allow time to get use to the weight we are pulling and have additional time available for setting up camp. In comparison, towards the latter stages of the journey, when we are accustomed to our sleds, passed the highest point of the ice sheet and can build a snow castle in our sleep we will be averaging around 30kms+ a day.

As we approach Hill 660 and the final stage of the expedition we enter crevasse and glacial lake territory. If extended periods of sunny weather are experienced prior to our arrival we run the very real risk of becoming trapped by the glacial melt. To explain, the lakes forming from such melts can span up to 5kms or more in length. This may seriously hinder us from finding an exit off the ice sheet, and as a result we may need to be heli lifted out.

To put it bluntly we will be burning through a lot of calories on this trip. In the beginning stages of the trip our daily intake will be around 4,000 calories a day. Towards the latter stages though this will increase – yes, increase – to around 5,600 calories a day. Apparently all our meals will include a big 2cm thick slab of butter to help reach this, nom nom nom… So why does it increase you may ask? Or I asked 🙂 The reason is this: even consuming this many calories we are still apparently going to lose up to around 5kgs of weight, and as our own personal stores of energy/fat and body mass is chewed up we will need the extra calories to help compensate for these losses.

PLAN FOR THE WORST, HOPE FOR THE BEST 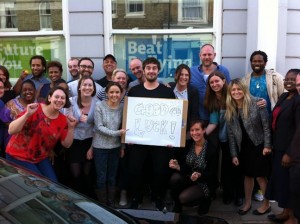 We will be very exposed camping on the ice sheet, and every day we will build a semi-circular snow wall around us at least as high as the tent for protection. But whilst on the eastern ascent we have a real risk of experiencing katabatic winds. Should a warning be received for one of these wind systems, we may have to build multiple walls because one just won't be enough, and have an ongoing rotating roster for digging, or if it is predicted to be extremely serious, we will dig down straight away and build a snow cave to camp in

I can assure you this type of preparation is not over-kill. At the extreme end of the spectrum for example, piteraq winds – a type of katabatic wind – are cold winds originating on the east that hurtle down the ice sheet at hurricane speeds from around 50m's/second up to around 80m's/second (translated: up to around 290kms/hr). The word 'piteraq' by the way in Inuit means 'that which attacks you'… rather appropriate description isn't it. Let's hope we don't cross paths with one on this trip.

The great news is we have raised just over £4,800 now, how awesome is that! I wonder who will be the lucky one that takes us over the £5,000 mark 🙂  There is still time to come on board and sponsor me if you are yet to press that button by the way. 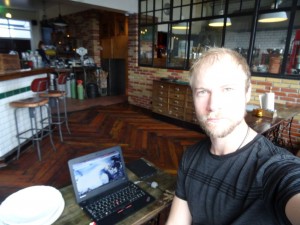 I decided to stop last night, get some sleep (albeit not much – too much excitement!) and finish writing in the morning, hence the 'yes I'm still waking up' look *chuckle*. I will be pretty much off the radar for all intents and purposes. I'm really looking forward to this adventure, it is going to be one hell of a challenge, and not made any easier with the side of my feet the way they are, but hey, I can be a stubborn bugga and will be doing my best to not let anyone down.

Thank you for all the words of encouragement and support, and a special thank you to the BeatBullying team for their email the other day, very cool and very kind.

Take care everyone and keep on smiling!