This weeks blog is more visual than verbal, since the short video below really paints the picture better than words will describe (at least given my narrative skills). The clip is a compilation of the changing weather conditions, showing the calm before the storm after spending over half a day fortifying our camp in preparation of what was to come, followed by the first signs of the storm, and ending with footage of what it was like being outside whilst in the heart of the piteraq enduring hurricane force winds.

Watch till the end, it really is a must see 😉

Again, any questions or comments… don't be shy, say hi!

The first photo was taken before the piteraq after spending over half a day fortifying our camp, with the main tent facing the storm protected by a double snow wall. The second photo was taken two days later in the morning after clearing up the camp. 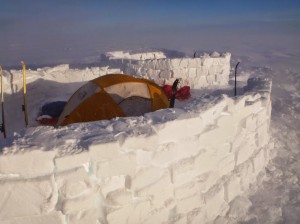 Whouâ, the Piteraq ! And the big walls around the tents !

We were warned of a potential change in wind direction too, which is why we had to wrap the walls around like we did. Hence why you can see one side of the wall relatively intact in the photos. We had four big snow pits around the camp from carving up the blocks during the day as well which looked rather cool. 🙂