As you will have gathered from Part 1 life on the glacier was not a laid back affair. This week I want to fill in the gaps of last weeks overview and get into some of the nitty gritty. As they say, whoever ‘they’ are, the devil’s in the detail…

Something we all looked forward to at the end of the day, jumping into that down-filled bag and getting some well-deserved rest. Although perhaps ‘snoozing’ is more appropriate than ‘sleeping’ 🙂 I struggle to recall more than a couple of nights when I did not wake up at least a few times. Time to share a few of the little quirks around bed time…

AFRAID OF THE DARK? NEVER FEAR, THERE ISN'T ANY 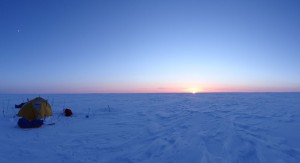 Other than the first few evenings at the start of the expedition night time was never dark, and when we entered the Arctic Circle the sun didn’t even set, which was kind of awesome actually.

This does mess with your mind and body clock, even after allowing time to acclimatise. No doubt it was a contributing factor for me waking up all hours and thinking it was time to get up (at least until I checked my watch and realised it was only 02:00, then 03:30, then 04:00…). In the end I started pulling my beanie down over my eyes which did help, at least on the ‘darkness’ factor.

WELCOME TO YOUR OWN PERSONAL HEATER… YOU!

One reason to make sure you had enough fuel for the fire, particularly at night, was not only to keep you warm but also to dry things out. I took to the habit of having a snack bar or chocolate next to me at night in case I woke up cold so I had something to eat and get the metabolism going again – and I have no idea how, but on the evening I surprised the team with a packet of Gold Bears (the extra fruit juice kind!) I managed to save them as my backup snack! I know hey, even I didn't believe I could make them last that long, cRaZy… 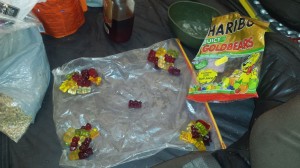 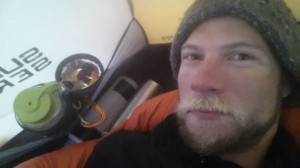 Your socks are generally soaked by the end of the day. For them to be dry in the morning, as disgusting as it may sound, I would have to utilise my body heat and sleep with a liner sock draped down each shoulder on my chest, and one of my thicker main socks along each thigh every night. This gave them the best chance of being ok in the morning. My main wool gloves would be down the left hand side of the sleeping bag below my heavier wool mid-layer (if it was not being worn whilst sleeping). Base layers were always on though as a minimum.

Four pairs of socks were recommended for the trip by the way, but I took an extra specific ‘sleeping’ set to change into at the end of each day which just gave you a little morale boost.

The cold saps energy from batteries quicker than you can say ‘Haribo-is-so-delicious-in-it’s-multitude-of-forms-a-global-holiday-should-be-declared-in-light-of-its-awesomeness’ (in case you didn't know, I'm a bit of a fan). Yes, any electronics left out over night were almost guaranteed to be near flat in the morning. Therefore next to me inside my sleeping bag each night on the right I placed my main camera, Garmin GPS unit and phone (my phone – Galaxy S4 – was in a heavy duty weather proof case, used as a back up camera during bad conditions and for recording a short diary entry each night before sleep).

Other pieces of kit to make their way into my sleeping bag included a roll of zinc oxide sports tape, sunscreen, moisturiser, Gerwhol foot cream… If I didn't then in the morning the glue on the tape would not work, and the creams would be frozen solid and unusable. These items were strategically placed down the right side of my sleeping bag below the electronics.

It was surprisingly very common to wake up in the morning and not only find your sleeping bag covered in frost but damp too, and I mean a real wet damp. This happens because all the perspiration your body generates overnight, including moisture from any wet items drying out has to go somewhere and transfers directly into the down of your sleeping bag. This causes the down to clump and freeze into little balls during the day, leading to less loft, leading to less insulation, and leading ultimately to a thinner feeling sleeping bag and colder nights. 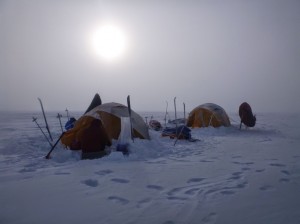 It was critical to get your sleeping bag clipped outside and radiated as soon as possible and as much as possible. Even if the sun was not showing some rays will still be coming through. Trust me, every little bit helped, and in the long run it made a difference. Tell you what though, when the sun did grace us with its presence on the odd occasion or for a short period in the morning or evenings… it was just awesome. It was such a nice feeling getting into a full on fluffy bag for a change, rather than a crinkled up piece of bleh!

Sweating away every day, not a shower in sight, the occasional ‘anti-bacterial wipe’ wash once a week (…if you remembered). Yes, by the time we came off the ice we smelled very ripe indeed! It wasn’t until we were in the truck heading to town after exiting the glacier that our senses switched back on and it really hit us how much we stank.

Brushing your teeth was essential in light of all the sugar being consumed. So unless you wanted your gums bleeding and teeth falling out you definitely brushed morning and night. 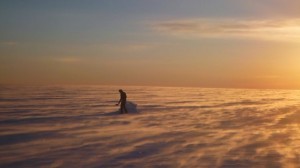 Yes, I am sure it is a question on the tip of many tongues. What was it like going to the bathroom? Well, to put it bluntly, whether it was -5 degrees  or -25 degrees, blizzard or a sunny day, when you gotta go you gotta go *chuckle* 🙂

No, it is not the most pleasant of experiences taking a number 2 bathroom break if it is a particularly miserable day, but hey, if your trousers fill up with snow you definitely have an incentive to pick up the pace and get that body heat going! Ha!

…there was one funny occasion when our guide Robert dug a rather deep pit for the toilet this time and hit a crevasse! A bottomless pit at your disposal, lucky it didn’t give way on us *shiver* – I’m all up for a soft landing but not that kind 😉

And on that comedic note I will leave off for now with, till next week – keep on smiling! 🙂 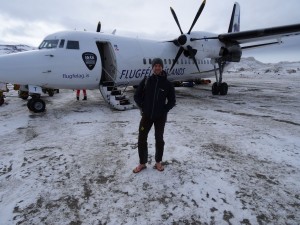 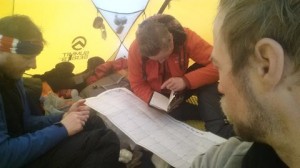 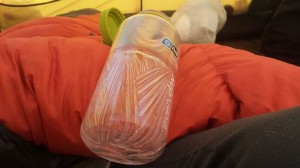 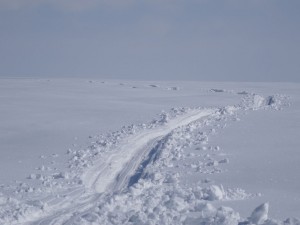 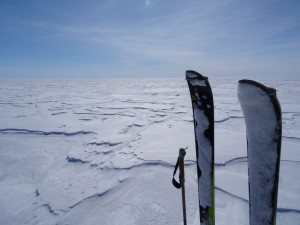 Example of some of the nicer terrain we crossed, extremely windy and still quite cold despite the sun making a show. Gives a good perspective of how small you felt