The final count down

The final count down

Following a thorough check of equipment and supplies the previous night we packed everything into our sleds on the morning of Monday 14th April and headed to the airport. Once there we placed each sled on the scales and made some final shuffles so weight was distributed evenly amongst the team as best possible i.e. so we would all suffer equally 😉 *chuckle*.

In the end my pulka weighed in at 83kgs! 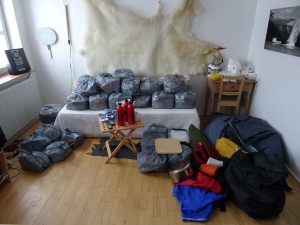 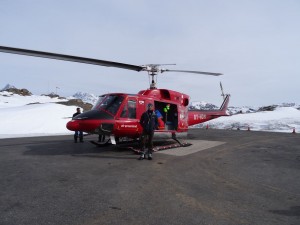 Once our pulkas (aka sleds) and skis were loaded we all jumped aboard the helicopter. Engines started up, rotors began spinning and butterflies hit home. This was really it, the count down was finally over. It was an amaaaazing flight by the way across to our starting point at around 900m’s on the edge of the Hahn glacier –  icebergs, frozen fjords, mountains…. eventually these disappeared though and our team landed with nothing but snow and ice surrounding us (see below video links for footage).

After touching down we unloaded the sleds quickly and shook hands with the pilot in farewell. I do not know how else to describe it, but there was a real heavy sense of 'good luck and goodbye', which gave me a very electric feeling like I was heading off into the unknown. After moving back a distance from the helicopter its engines fired up again, and with a lazy lift it headed off into the distance back towards Kangerlussuaq and civilisation. It was at this point the situation hit home…

We were now on our own 🙂

Day 1: Lift off …after packing the sleds and gear on the helicopter we were ready to leave Kangerlussuaq for the edge of the Hahn glacier (VIDEO I)

Day 1: …now on our own, no turning back, time to start moving (VIDEO IV)

NEXT WEEK: CAMP LIFE (some great pics in that one, and more video blog clips to come)

BEATBULLYING FUNDRAISE: STILL TIME TO DONATE TOWARDS THE ANTI-BULLYING CAUSE – CLICK HERE TO GO TO MY JUSTGIVING PAGE